T. Renkwitz et al. Validation of the radiation pattern of the VHF MST radar MAARSY by scattering off a sounding rocket’s payload

The Middle Atmosphere Alomar Radar System (MAARSY) is a monostatic radar with an active phased array antenna designed for studies of phenomena in the mesosphere and lower thermosphere. Its design, in particular the flexible beam forming and steering capability, makes it a powerful instrument to perform observations with high angular and temporal resolution. For the configuration and analysis of experiments carried out with the radar it is essential to have knowledge of the actual radiation pattern. Therefore, during the time since the radar was put into operation various active and passive experiments have been performed to gain knowledge of the radiation pattern. With these experiments the beam pointing accuracy, the beam width and phase distribution of the antenna array were investigated. Here, the use of a sounding rocket and its payload as a radar target is described which was launched in the proximity of the radar. The analysis of these observations allows the detailed investigation of the two-way radiation pattern for different antenna array sizes and beam pointing positions 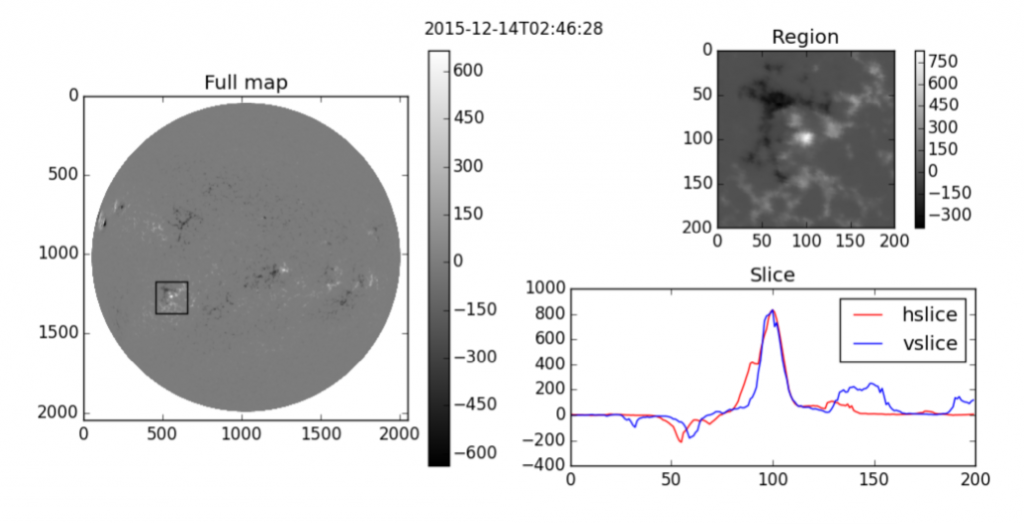 We introduce and analyze the first data from an array of closely spaced Global Positioning System (GPS) scintillation receivers established in the auroral zone in late 2013 to measure spatial and temporal variations in L band signals at 100–1000 m and subsecond scales. The seven receivers of the Scintillation Auroral GPS Array (SAGA) are sited at Poker Flat Research Range, Alaska. The receivers produce 100 s scintillation indices and 100 Hz carrier phase and raw in-phase and quadrature-phase samples. SAGA is the largest existing array with baseline lengths of the ionospheric diffractive Fresnel scale at L band. With an initial array of five receivers, we identify a period of simultaneous amplitude and phase scintillation. We compare SAGA power and phase data with collocated 630.0 nm all-sky images of an auroral arc and incoherent scatter radar electron precipitation measurements, to illustrate how SAGA can be used in multi-instrument observations for subkilometer-scale studies.

Abstract
We present a statistical framework for estimating global navigation satel-
lite system (GNSS) non-ionospheric differential time delay bias. The biases
are estimated by examining differences of measured line integrated electron
densities (TEC) that are scaled to equivalent vertical integrated densities. The
spatio-temporal variability, instrumentation dependent errors, and errors due
to inaccurate ionospheric altitude profile assumptions are modeled as structure
functions. These structure functions determine how the TEC differences are
weighted in the linear least-squares minimization procedure, which is used to
produce the bias estimates. A method for automatic detection and removal
of outlier measurements that do not fit into a model of receiver bias is also
described. The same statistical framework can be used for a single receiver
station, but it also scales to a large global network of receivers. In addition
to the Global Positioning System (GPS), the method is also applicable to other
dual frequency GNSS systems, such as GLONASS (Globalnaya Navigazion-
naya Sputnikovaya Sistema). The use of the framework is demonstrated in
practice through several examples. A specific implementation of the methods
presented here are used to compute GPS receiver biases for measurements in
the MIT Haystack Madrigal distributed database system. Results of the new
algorithm are compared with the current MIT Haystack Observatory MAPGPS
bias determination algorithm. The new method is found to produce estimates
of receiver bias that have reduced day-to-day variability and more consistent
coincident vertical TEC values.

Plasmaspheric electron content is, beyond the ionosphere as major source, a significant contributor to the overall TEC budget affecting GNSS signals. The plasmasphere can induce half or more of the GNSS range errors caused by atmospheric electrical charges, in particular at nighttime. At DLR Neustrelitz, Germany, GPS measurements recorded onboard the LEO satellite CHAMP were used to reconstruct the topside electron density distribution (ionosphere and plasmasphere) up to GPS altitude, applying a model-based assimilation technique. In this paper, the potential of these CHAMP topside reconstructions for analyzing space weather related changes in the geo-plasma is investigated. For this purpose, comparisons are made between the CHAMP reconstructed profiles and electron densities derived from passive radio wave observations by the IMAGE RPI instrument for years 2001 till 2005.

The comparison results indicate that an improvement, compared to the electron density of a background model, can be achieved by CHAMP data assimilation. The improvement is especially visible in the L-shell region below 3, which contributes notably to the GNSS signal delays. However, for the region around the plasmapause, systematical electron density underestimations of the background model w.r.t. the IMAGE data are detected. The rather limited CHAMP data coverage and the degraded observation geometry at these high altitudes seem to be not sufficient for complete compensation of this underestimation during the assimilation procedure.